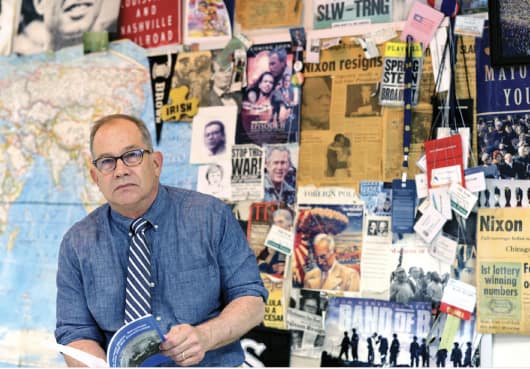 From NEA.org: Teaching in an Era of Polarization

For many educators, the stakes are way too high to stay strictly “neutral” in the classroom.

For the first time in his 32-year teaching career, Kelly Keogh found himself standing in front of his social studies class, reminding students that Nazis are, in fact, not good people. Keogh, who teaches AP government and international relations at Normal Community High School in Illinois, was responding to then-President Donald Trump’s shocking comments that the neo-Nazis who marched on Charlottesville, Va., in August 2017, included “some very fine people.”

Obviously, no student in Keogh’s class endorsed Trump’s comments. Keogh’s condemnation was borne out of exasperation and frustration at the toxicity of what now passes as political discourse in the country.

The danger, as Keogh saw it, was the normalization of such rhetoric in our hyper-polarized political climate. There was no “both sides” to the Charlottesville violence, nor was there any legitimate defense for the insurrection at the U.S. Capitol on Jan. 6, 2021.

Until 2016, Keogh was guarded about expressing his opinions about politicians’ statements, however controversial. But when the rhetoric, particularly over the last five or so years, began to obliterate already blurred standards of civility, decency, and established fact, Keogh shed some of his neutrality.

“I struggled with it at first, but I began to take more of a stand. As an educator and presumably a role model, I couldn’t let this stuff go by without comment,” he recalls.

But many educators still stay far away from discussing political topics or events, either because they fear reprisal or believe it to be inappropriate (or both). But today, “political” subjects could mean just about anything.

Educators should always be mindful of overstepping boundaries by endorsing candidates or specific party positions, says Paula McAvoy, a professor of social studies education at North Carolina State University. But she believes the danger posed by polarization may require teachers to have a more active presence and focus.

“Extreme polarization can lead to an attack on our values,” McAvoy says. “We need to recognize that it’s undermining our democracy, and that’s not something that schools can or should ignore.”