What Do We Do When We’re Under Attack (Again)?

We Stand Up. We Fight Back!

Several of you have already received mail at your home from the Illinois Policy Institute. Please take a few moments to read through the important information below.

You may recall the information we provided last year regarding the anti-union attacks from the Illinois Policy Institute (IPI).

Well, they’re back at it. So, we thought it was a good time to remind you about why we’re being attacked and what we can do about it.

The IPI and their partners have been engaged in an all-out assault on public education, public employees, and public employee unions for quite some time. The IPI is part of the State Policy Network, and includes their political advocacy arm (The Illinois Opportunity Project), legal arm (The Liberty Justice Center), their “news”/content provider arm (The Illinois News Network – INN), and a series of “non-profits”. The IPI and their partners been funded by wealthy donors like former Illinois Governor Bruce Rauner, Betsy DeVos, and others who see the potential for major profit in education and the prospect of political power that comes by disarming public employee unions.

You can learn more about the IPI and their “news” in this brief video produced by IEA:

So, about the mail you received … 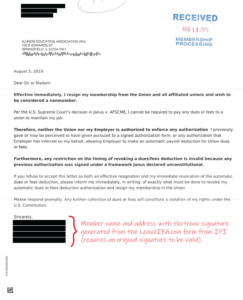 (You can see responses to those IPI lies here: at proudieamember.org.)

Their efforts began last year with direct mail. And, the mail you likely just received is part of their continued attack. They’re spending a lot of time and money to make it easy for you to drop your union membership. You might want to ask yourself why (hint: it’s not because they think you dropping your membership will benefit you!).

We expect these attacks to continue.

As you likely already know, our opponents are well-funded and have an agenda. We fully expect their efforts to continue. Their efforts last year were laughably unsuccessful (because members stood together and stuck with their union). So, as they turn up the pressure, you might get more mail at home, you may see billboards or hear advertisements, or even to have one of their folks show up at your home (get a free window cling here: strongerunitedillinois.org)

Ultimately, the IPI and their partners were not just trying to win the Janus vs. AFSCME case in 2018. That was only the beginning. They’d like to see public education decimated so it can be privatized and profit-ized. And they’d like to see those who stand in their way politically – primarily public employee unions – de-funded and de-fanged, so they can accomplish more of their political agenda, an agenda that will benefit the wealthy and further hurt the middle class.

You can ignore the IPI’s mail and misinformation.

You can post a picture of the mail you receive on social media and include a hashtag (#SayGoodbyeToIPI #solidarity #IEAstronger #StrongerUnited #StickingWithMyUnion).

You can send it back “return to sender”. Or you can get it to the UFEA/IEA office (drop it off yourself or get it to your building rep) and we’ll assemble a “care package” and send them back to the IPI.

You can submit information about what you received in our Membership Protection Center, and learn more about these opponents, at proudieamember.org. That helps us track these attacks and respond.

You can learn more about these attacks, why we’re being targeted, and what you/we can do to fight back by visiting strongerunitedillinois.org.

You can reaffirm your commitment to UFEA and the IEA. If you want to do that in writing, just let us know, or send us a note.

If you have questions, you can reach out to a building rep or other UFEA leader.

If you’d like to have a building meeting to discuss these issues, you can work with your building rep to make that happen. And if you’e like a building visit from your president, Lindsey Dickinson, to talk with your staff that can be scheduled as well!

More than anything, you can stick by each other, and stand with each other.

As we told you before, when the IPI contacts you, they will be encouraging you to drop your union membership.

When the IPI and other opponents contact you, they won’t tell you why you should be a member.

They won’t be sharing with you the benefits of membership

. They won’t tell you your union gives you a strong collective voice, provides liability insurance, reimbursement for legal fees, advice on all sorts of work related matters and free professional development clock hours. Or that you can get all sorts of discounts, including at Target, on your cell phone bill, your car insurance, travel and more.

They won’t tell you that unions have played a critical role in building and protecting the middle class in America, providing hard-working people economic stability for their families and giving them the tools to build a good life, home and education for themselves and their children.

They won’t tell you unions raise wages for both union and nonunion workers, or that we advocate for policies that benefit all working people such as increases to the minimum wage, affordable health care and great public schools.

They won’t tell you that through collective bargaining, members of strong unions are scoring victories that help entire communities.

And, they won’t tell you that when individuals drop their membership, not only does the individual lose out on benefits, but the union is weaker. It makes it harder for us to stand united and fight for our students, our schools, our paychecks and our benefits.

When they contact you — when you get mail, see billboards, hear advertising and negative messages, or when they show up at your door — remember that we are Stronger United.

We’ll continue to keep you informed. And, we’ll be continuing to fight for you — and with you — today, and in the future.

Thank you for the work you do – for our students, for our schools, and for each other as part of UFEA.

On behalf of UFEA leadership, and in solidarity as we use the power we have for good, to empower each other and our students,